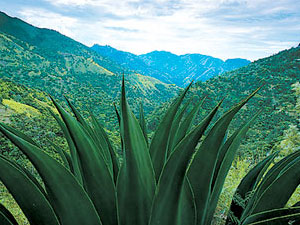 The Blue Mountains are the longest mountain range in Jamaica. They include the island’s highest point, Blue Mountain Peak, at 2256 m (7402 ft).  From the summit, accessible via a walking track, both the north and south coasts of the island can be seen. On a clear day, the outline of the island Cuba, 210 km (130 mi) away, can also be seen.

The Blue Mountains rise to its elevations from the coastal plain in the space of about 16 kilometres (9.9 mi), thus producing one of the steepest general gradients in the world. This forms cooling relief from the sweltering heat of Kingston below. Their summits rise and fall for 24 miles and are 14 miles at their widest point. The temperature decreases from around 27°C (80°F) at sea level to 5°C (40°F) at the Blue Mountain Peak, just 16 km (9.9 mi) inland.

The island’s average rainfall, which is much greater in the mountain areas facing the north and east, is 1,960 millimetres (77.2 in) per year. Where the higher elevations of the Blue Mountains catch the rain from the moisture-laden winds, rainfall exceeds 5,080 millimetres (200 in) per year, with some areas recording totals of more than 7,620 millimetres (300 in). This climatic diversity has enabled a higher rainfall yield that feeds the lush vegetation, which would include the towering trees and more than 500 species of unique flowering plants.

The Blue Mountains are home to the world’s second largest butterfly and the largest in the Americas, the Homerus swallowtail (Papilio homerus). The Jamaican Coney (Geocapromys brownii), a type of rodent, and the Jamaican boa (Epicrates subflavus) are also found there. More than 200 species of birds live in the Blue Mountains, and most are exclusively neotropical.

We can arrange local tours for guests of Island Villas Jamaica!